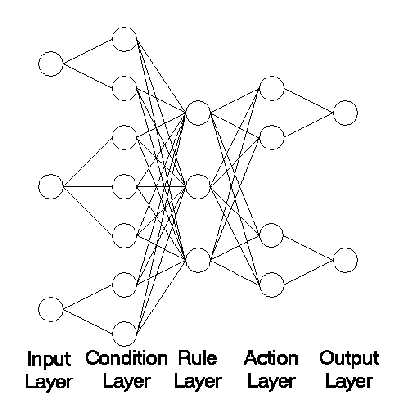 Figure 1 - structure of EFuNN. This figure shows an idealised EFuNN with three input neurons. Two MF are attached to the first input neuron, three to the second, and two to the third. There are three rule neurons and two outputs, with two MF attached to each output.

The activation function for a condition neuron c, which is based on triangular membership functions, is defined as:

is the activation of the condition neuron

is the input vector

The third layer of neurons is the evolving layer, which is also referred to as the rule layer. The distance measure used in this layer, which is the distance between the fuzzified input vector and the weight vector, is defined as:

is the activation of the action node

is the number of actiion neurons attached to

is the activaiton of the action node

is the number of action neurons attached to

The algorithm for extracting Zadeh-Mamdani fuzzy rules from a trained EFuNN is as follows:

for each evolving layer neuron do

for each in put neuron do

Find the condition neuron with the largest weight

for each output neuron do

In a nutshell, this algorithm treats each evolving layer neuron as a fuzzy rule, and finds the connections with the largest weights. Since the connection weights in EFuNN represent fuzzified input and output vectors, by selecting the winning weights, the algorithm is finding the MF that the example values best fit.