This page will introduce the basic structure of ECoS networks and the ECoS learning algorithm. At the moment, only algorithms that are included in the ECoS Toolbox are described here. More algorithms will be added presently.

An ECoS network is a multiple neuron layer, constructive artificial neural network. An ECoS network will always have at least one "evolving" neuron layer. This is the constructive layer, the layer that will grow and adapt itself to the incoming data, and is the layer with which the learning algorithm is most concerned. The meaning of the connections leading into this layer, the activation of this layer's neurons and the forward propagation algorithms of the evolving layer all differ from those of classical connectionist systems such as MLP. For the purposes of this paper, the term "input layer" refers to the neuron layer immediately preceding the evolving layer, while the term "output layer" means the neuron layer immediately following the evolving layer. This is irrespective of whether or not these layers are the actual input or output layers of the network proper. A generic ECoS structure is shown below: 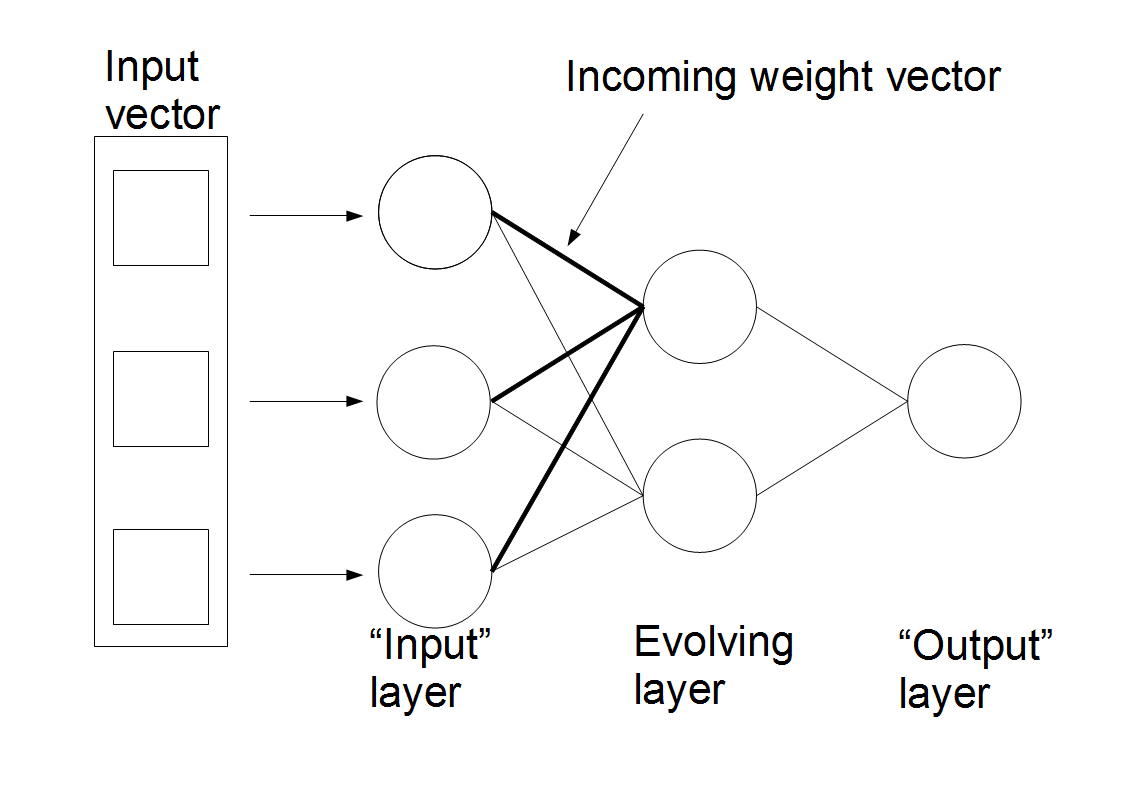 The activation  of an evolving layer neuron  is determined by:
Where:


is the distance between the input vector and the incoming weight vector for that neuron.

Since ECoS networks are fully connected, it is possible to measure the distance between the current input vector and the incoming weight vector of each evolving-layer neuron. Although the distance can be measured in any way that is appropriate for the inputs, this distance function must return a value in the range of zero to unity. For this reason, most ECoS algorithms assume that the input data will be normalised, as it is far easier to formulate a distance function that produces output in the desired range if it is normalised to the range zero to unity.

The ECoS learning algorithm is based on accommodating new training examples within the evolving layer, by either modifying the weight values of the connections attached to the evolving layer neurons, or by adding a new neuron to that layer. The algorithm employed is:


for each input vector and its desired output vector do

Propagate through the network

Find the most activated evolving layer neuron and its activation

Update the connections to the winning evolving layer neuron

The weights of the connections from each input to the winning neuron are modified according to the following equation:

The weights from neuron to output   are modified according to the following equation:

is the connection weight from to outputat time
is the activation of
is the error at , as measured according to the following equation: